When treatment is complete, native conditions are restored.  Complete mineralization results from a consortium of native microorganisms working together synergistically. Cometabolic activity (enzymes generated by an organism growing at the expense of one substrate) can also transform a different substrate that is not associated with that organism's energy production, carbon assimilation, or any other growth process - degradation of a compound only in the presence of other organic material that serves as the primary energy source (11).

Multiple bacteria populations found in nature provide the mechanisms to break down petroleum compounds to CO2 and water that is not possible with a single bacterial strain. Many organic contaminants will serve as a substrate. However, for some hazardous chemicals, another substrate is necessary. The compound targeted for degradation may be at concentrations below that necessary for good biological response for bioremediation. The addition of a primary substrate (contained in HC-2000) supplies additional energy. When another energy and carbon source is made available to stimulate biological growth, it becomes the primary substrate and the target compound to be degraded is the secondary substrate.

Heterotrophs have been demonstrated to be effective degraders of a variety of hazardous and non-hazardous wastes including petroleum hydrocarbons, chlorinated solvents, and other pollutants. A myriad of degradation data was generated in the 1980s during research on land farming of hazardous wastes (1). Ross McKinney in his book Microbiology for Sanitary Engineers states ... the best source of micro-organisms is soil. The soil can furnish all the microorganisms ever needed in waste disposal. My advice to all sanitary bacteriologists who seek a special culture is to look under their feet; the supply is inexhaustible (2). HC-2000 targets native heterotrophs that control the bioremediation process.

HC-2000 (developed by Remtech in 1998) degrades, cleans, disinfects, desorbs, reduces vapors, odors from fuels, oils, lubricants, and chlorinated and non-chlorinated solvents in soils, ballast, gravel, surface water, groundwater, and other media. HC-2000 has been used successfully on over 400 cleanup sites during the past 17 years.

HC-2000 bioremediation accelerator product is designed to work on freshwater applications and refined fuels and solvents that are not addressed by EPA’s NCP List of saltwater approved crude oil remediation and cleaning products. HC-2000 is up to an order of magnitude less toxic to aquatic organisms than most of the NCP products.

HC-2000 is particularly cost-effective where: service or business interruptions need to be minimized; access is limited; areas are environmentally sensitive; or sites are geotechnically, hydrologically or structurally sensitive or unstable.

Soil Treatment - treats surface soil passively (via topical or gravity feed systems for soil depths up to 3 to 5 ft) or actively (in combination with biovent/injection & biosparge/multiphase extraction systems for depths exceeding 5 ft).

Security Sensitive Facilities - in access restricted areas, applications can be made quickly with minimal disruptions at airports, military and penal installations.

Native heterotrophs are ubiquitous in the environment and are found in soil, water, groundwater, and waste in aerobic, facultative, methogenic, and anaerobic zones. Indigenous (insitu) bacteria are the predominant degraders in soil, groundwater, surface water, railroad ballast, gravel, and saltwater.

Numerous publications conclude that very little scientific data demonstrates that enhanced degradation (microbial addition or bioaugmentation) works on full-scale cleanups. According to peer reviewed literature, bioaugmentation appears to have little benefit for the treatment of spilled petroleum hydrocarbons in the environment. Microbial addition has not been shown to work better than nutrient addition alone in many field trials (10). Biostimulation has been proven to be a promising tool to accelerate and enhance the natural attenuation process.

Native soil populations capable of degrading petroleum hydrocarbons have been reported to range from 10 to 20% of all soil heterotrophic bacteria. Soil particles containing heterotrophs are found in lower concentrations in groundwater and surface water (2 x 106 cells/ml) than in soil (2 x 107  cells/gm) (11), albeit provide the metabolic and synthetic activity to digest petroleum hydrocarbons. Approximately 67% of all bacteria in groundwater sediment are attached to the silt and clay fraction, though this sediment fraction may account for a small fraction of the total sediment by weight. 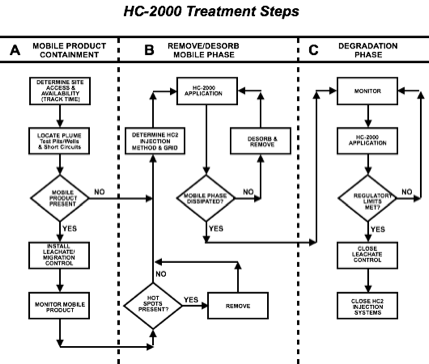 HC-2000 has a shelf life that exceeds five (5) years (as long as it is stored in its concentrated state and at temperatures below 120oF).  HC-2000 is activated when it is mixed with water according to the contaminated matrix and applicable dilution ratios. Diluted mixtures of HC-2000 have a shelf life of a couple of weeks and should be utilized as soon as possible after mixing with water.

Regulatory authorities frequently favor (and generally quickly approve) the acceleration of natural degradation processes with a Green Sustainable Technology as apposed to addition of foreign microbes or toxic materials into the environment. Stimulating natural biochemical processes reduces the possibility of toxic by-product formation and allows multiple native species (operating under a variety of environmental conditions) to reduce contaminates to minimum levels. When treatment is complete, native conditions are restored.

HC-2000 has been approved by Georgia, Florida, and other states for the treatment of soil and groundwater on a case -by-case basis. No specific approval is required for soil applications in Georgia. Georgia frequently only requires three (applications of HC-2000 to soil without performance sampling to complete a cleanup.

HC-2000 is a Green Sustainable Technology.  HC2 restores the environment by accelerating natural systems (heterotrophic bacteria) to degrade petroleum and solvent based contaminants.  HC2 is non-toxic and removes toxic contaminants with minimal economic disruptions to business and generally cost less than other remedial technologies. When treatment is complete, native conditions are restored.

Other remedial technologies may leave residual contaminants that require additional treatment. These technologies include; pump and treat, soil venting and air sparging, and total fluids extraction. Why not use a technology that can finish the job?

Site remediation costs with HC-2000 typically range from $15 to $225/cy of contaminated media. Costs are site specific and are affected by the type and amount of contamination, local geology, volume of contaminated media, and contaminant location. HC-2000 performs best in formations where adequate communication and mass transfer are present or can be established.

HC-2000 is non-toxic, non-allergenic, and contains food quality ingredients. Accelerating the natural degradation process (Biostimulation) with HC-2000 is generally received favorably by regulatory authorities and the general public.  Native heterotrophs are already acclimated and distributed in the environment. All that is required is to deliver HC-2000 to the degraders and provide adequate environmental conditions. When treatment is complete, native conditions are restored.

HC-2000 goes right to work by energizing native heterotrophs. Chemical oxidization with permanganate, peroxide, and ozone frequently oxidize materials other than target contaminants, i.e., a significant mass of reagents are wasted. Chemical oxidization and bioaugmentation may form toxic by-products that are not normally associated with cometabolic native biochemical reactions.

Oxygen and hydrogen release compounds singularly introduced generally rely on passive slow release mechanisms and depend on advection and dispersion to transport the reagent to the contaminant. Limiting nutrient deficiencies, enzymes, and co-factors are not addressed. Adsorbed and soil pore bound contaminates are only addressed by sufficient concentration gradients to draw reactants to contaminants. HC-2000 provides contaminant desorption with biosurfactants that is generally more effective than concentration gradients. Aggressive pulsed reagent injection (used with HC- 2000) generally provides better mass transfer and mixing.

HC-2000 is easily assimilated by native bacteria without a lag time. Commercial fertilizers and synthetic surfactants may initially inhibit microbial degradation. Nutrient and carbon sources such as molasses, sugars, and vegetable oil need to be broken down further prior to assimilation by microbes. Organic nitrogen and proteins (contained in HC-2000) are a preferred source of nitrogen over nitrates, ammonia, and other compounds containing nitrogen.